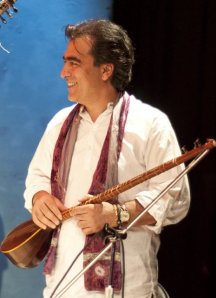 Bajelan received his formal vocal education with Master Shahram Nazeri. He completed the Persian repertoire under supervision of Master Nasrolallah Nassehpour. In addition to studying vocal Radif of Persian Classical music, Bajelan continued studying the Old Songs (tasnif) with late Grand Master Ali Asghar Bahari and Master Abdoulvahab Shahidi. Grand Master Bahari passed on to Bajelan his own interpretation of the Radif. Bajelan continued and perfected his knowledge of Radif and the School of Esfahan with the highly precise teachings of the late Grand Master Hossein Omoumi. He studied the singing style of Persian masters such as Seyed Rahim Seyed Hossein Taherzadeh and Adib Khonsari with Master Omoumi. Bajelan has devoted his life to traditional Persian music and literature. He has extensive credits performing with such legendary artists as Grand Masters Jalil Shahnaz, Faramarz Payvar, and Ali Asghar Bahari among others. He has a deep passion for Persian Literature and he has studied the compositional form of Persian poems and music with masters Hushang Ebtehaj, and Fereidoun Moushiri.