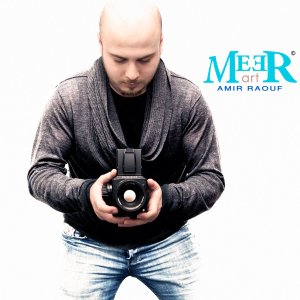 Amir A. Raouf was born in Tehran, Iran in the summer of 1981. Despite his love for art and photography he initially earned a degree in Software Engineering. Later, Amir started studying photography and videography in the Youth Cinematographers Centre as well as Arts Faculty of Tehran University.

Amir moved to the United Kingdom in 2006, taking Street Fashion photography course in the University of the Arts London(LCC). He has ever since continued working in the same field and has set up his own photography studio (Meer Art) in the East London area since 2010.

Amir has worked in various fields of photography such as Fashion and Editorial, Portrait, Advertising as well as Theater Photography.