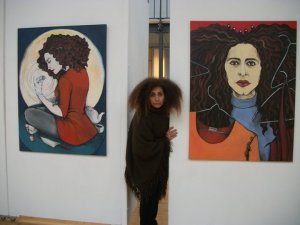 Maryam studied Graphic Design at Azad University in Tehran ,Iran.During her study she developed a style which was identifiable by viewers. She had her first solo exhibition in 2001 at Haft Samar gallery in Tehran  and was selected for a group show by 10 Iranian female painters in Brussels on the same year . Maryam had her last solo exhibition at Haft Samar on 2002 and moved to  the UK  shortly after hoping to start a career  in Graphic Design but soon realised that she had very little interest in this field and explored different areas such as performance and theatre but currently her main focus is back on paintings.

She have been involved with many community art projects and cultural events such as Edinburgh Iranian Festival and Museum At Night events at The London Canal Museum and have been an exhibiting artist in UK and internationally.